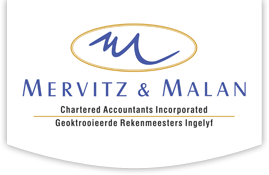 What makes us great

Max completed his articles with Coopers & Lybrand in 1980. He was admitted as a partner at Mervitz & Malan in 1981. His client profile is mainly in the field of family managed and owned business. He has served the accounting profession in various capacities and continues to serve on various committees and forums of the South African Institute of Chartered Accountants. Max also has extensive experience in property development and property administration.

Willem served his articles with Coopers & Lybrand and completed his articles in 1982. He was assistant director at the Receiver of Revenue, Pretoria until 1987. He became a partner in 1987 and specialises in taxation and estates. He currently serves on the Taxation committee of the Pretoria Association of Chartered Accountants.

Carl matriculated in 2000 at Pretoria Boys High School. He obtained his B.Com Accounting Sciences degree in 2003 from the University of Pretoria and subsequently his B.Com (Hons) Accounting Sciences degree from the same institution in 2005. He joined the team at Mervitz & Malan in 2006 as a trainee accountant and qualified as a Chartered Accountant in 2009. In 2012 he was promoted to partner and started servicing a wide range of clients. Carl is also a Registered Assessor with the South African Institute of Chartered Accountants. His field of specialisation include External Auditing, Income tax, Accounting and Business Valuations.

Director in Greenpen Accountancy Services (Pty) Ltd. Carel joined the group as a clerk in 2003 and progressed through the ranks until being admitted as a partner in 2010. After completing his articles as an audit clerk with Mervitz and Malan, he qualified as a Professional Accountant in 2008. Carel has excelled in the fields of management reporting, financial reporting and statutory compliance and has experience in various acquisition and merger transactions. Carel is also a Certified Independent Reviewer.

Michael qualified as a Chartered Accountant in 2012, after completing one year of academic articles at Stellenbosch University and completing the subsequent two years of his articles at PwC. Michael worked as an assistant manager and manager at PwC from 2013 to 2015. He joined the Mervitz & Malan team in 2015 and was admitted as a partner in 2016. Michael has a wide range of auditing experience from his time at PwC. Michael currently focuses on financial statement compilations, independent reviews, income tax, statutory compliance and property development.

Werner obtained his Bachelors in Accounting, Magna Cum Laude, from Wichita State University, Kansas, in December 1999. After graduating he pursued a professional athletics career until 2008, the pinnacle being in 2000 when he represented South Africa at the Olympic Games in Sydney, competing in the 800m. He joined Mervitz & Malan in 2009 as a trainee accountant and continued his studies. Werner qualified as a CA (SA) in 2012. He became an audit manager in 2012 and in 2017 he was appointed as a director of Mervitz & Malan. Werner is a Registered Auditor with IRBA as well as a Registered Assessor with SAICA. He specialises in external auditing, accounting and taxation.

Teresa completed her articles with Leask & Partners in 2005 and qualified as a Chartered Accountant in 2006. Teresa is also a Registered Assessor with the South African Institute of Chartered Accountants. She was promoted to partner with Leask & Partners in 2007 and merged with Mervitz & Malan on 1 March 2017. Teresa specializes in external auditing, taxation and accounting.

WHAT MAKES
US UNIQUE

Between them, the eight directors have countless years of experience in areas such as auditing, accounting, taxation, management consulting, estate planning, property development and property administration, company secretarial matters and designing and implementing of systems..

Staff is the heartbeat of the company. Our staff comprises of managers, trainee accountants, bookkeepers, tax specialists, property administrators and secretarial staff. The company employs approximately 60 staff members. Staff is shared with our sister company.

We embrace originality, initiative and creativity; and believe in creating solutions that enhance efficiency and effectiveness, without compromising standards. We have developed and continue to improve our own unique audit methodology that provides for an integrated and logical set of standard schedules, checklists, work programs and working papers that facilitate the performance of an audit of financial statements in accordance with International Standards on Auditing.

The group has a wide customer base, including manufacturers (mainly in the steel, foundry, electronics and packaging industries – these include groups with turnovers in excess of R300 million), retailers, property investment, property development and property services companies, companies in the pharmaceutical industry, companies in the engineering and construction industry, attorneys, medical practices, other professional practices, information technology companies, personal services companies, churches, schools, provident funds, etc.

We are committed to implement and uphold the highest professional standards, including equipping our trainee accountants with the necessary skills to operate as professional accountants and auditors. Training is done both on an in-house and external basis. Furthermore, training is enhanced through a system of audit teams reporting to audit managers. Each audit team comprises a balance of experience, taking cognisance of the academic level of each trainee and the number of completed years of the training contract.

ON-GOING INVOLVEMENT IN THE PROFESSION

IN SUMMARY – THE ENTIRE MERVTIZ & MALAN EXPERIENCE IS UNIQUE